Withlacoochee River – Its History and Ours!

Your Cooperative is named after the majestic river that flows through eight counties, five of which are in our service area.  These counties are Citrus, Hernando, Lake, Levy, Marion, Pasco, Polk, and Sumter.  It is also one of the few rivers in the world that flows south to north.  Originating in the Green swamp, the Withlacoochee River winds for 141 miles before emptying into the Gulf of Mexico near Yankeetown.

The name “Withlacoochee” is derived from one of Florida’s Native American tribes, the Creek.  It means “Little Big Water”, which makes sense as both floods and droughts have caused the water levels to rise or drop many times over its history.  Another meaning is “crooked river”, which accurately describes the twists and turns it makes on its way towards the Gulf of Mexico.

WREC was first organized on August 20, 1941, and the rivers name was chosen as it was a common thread that ran through our original service areas of Citrus, Hernando, and Pasco counties.  Just a few days after our organization, however, we had our first ‘drought’, as World War II was declared, and all our Rural Electric Administrative loans were repealed until after the war’s conclusion in 1945.

After the new loans were approved in 1945, the first Member was connected on April 4, 1947, and a ‘flood’ of new Members started to grow.  Today, WREC has over 195,000 active Members.  Being a Cooperative, WREC is different from many electric utilities in the fact that our status is a not for profit one, and we abide by the seven Cooperative principles to help both our Members and our community.  These principles and their meanings are:

The Withlacoochee River and your Cooperative provide many benefits to help the communities that they impact.  The river supplies necessary water and food to an extensive and diverse ecosystem, including the threatened Florida scrub-jay bird.  Your Cooperative supplies electric power to a diverse Membership of people with the intention of making their lives better and more comfortable.  We are both a key piece of fabric that binds our community together.

Read more about your WREC Cooperative How to Spot a Scam

Recently, several Members have contacted us and reported that certain individuals called them pretending to represent WREC.  Please review the picture information about how to spot a scam. Be safe and do not get scammed, especially during these trying times.

Read more about How to Spot a Scam 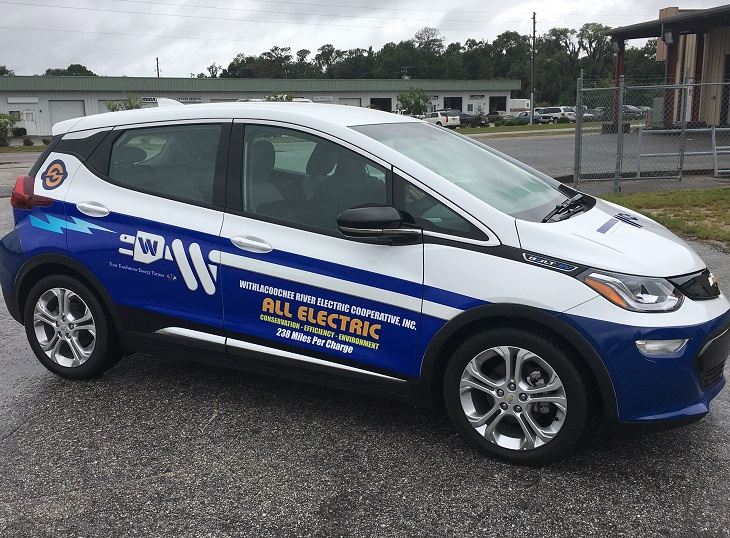 Electric Vehicles are the Future!

WREC recently launched it’s new choose EV feature on its website to allow our Members to make informed decisions about EV’s and provide them with the most accurate and updated information available. This is located on the top tab of our home page under ‘EV Information‘. Please check this out as there is a multitude of up-to-date information regarding Electric Vehicles. WREC is Prepared! WREC’s Member Newsletters are designed to inform our Members of a myriad of items going on throughout our Cooperative.  These could range from service or safety articles, community outreach projects, notices for our Annual meeting, information about our yearly Hurricane season, WREC scholarship awards, and many more.  These Newsletter are intended to let our Members know what we are doing in our community and all of the programs we offer them.  We appreciate our Members!

Live chat is not currently available. It is only available during non-holiday working hours, Tuesday - Friday, from 9 am - 4 pm.